skip to main | skip to sidebar

In the vague hope that someone might look at this blog occasionally, I'll publicise this here.

The local records centre is organising a one-day workshop for people to learn more about the habits and identification of solitary bees. It will probably take place at the end of November at the Cardiff Museum. If anyone is interested in attending, please contact me rushmoor1@tiscali.co.uk
Posted by Bob & Annie at 06:29 No comments:

To answer Derek G it is a longhorn beetle called Leptura maculata although it used to be called Stangnalia melanura. Ought to be called Wasp Beetle but that common name goes to a much less significant looking beast Clytus ariestis and I don't think L. maculata has a sensible name. I think they are very impressive. I normally see them on Hogweed flower heads. Has a status of local in UK. WWBIC would be interested in your record.
Nigel Ajax Lewis
Posted by Richard Dobbins at 00:07 No comments:

Things seem a bit quiet on this site lately.

Good numbers of small tortoiseshells around this year after the alarm bells going off last year about a drastic decrease.
Posted by Bob & Annie at 14:41 No comments:

A rare treat - a clouded yellow in my Camrose garden last week!
Posted by Jon Hudson at 14:10 No comments:

Good to see others are observing a mass of butterflies on sunny days. After bad summers in 2007 2008 I have been surprised at the numbers on my transects. Tortoiseshells and peacocks and common blues are in short supply.
Walking along the Ceredigion coast path from Mwnt towards Aberporth there were masses on a large patch of knapweed. They were mostly whites and very fresh painted ladies with the odd tortoiseshell and peacocks as well as gatekeepers and meadow browns. Small coppers were fairly
numerous in the short grass on the path itself.

I haven't trapped so many footman moths this year and haven't seen a buff tip for a couple of years. There have been more poplar hawkmoths than usual also brussels lace and willow beauties. There have been several prominents - pebble,pale and coxcombs

For the past two years I have looked for the marmalade hoverfly Episyrphus balteatus without much success. There are plenty around in my garden this year - maybe because I decided lawns were a waste of time and let the grass and wild flowers grow.
Posted by Joyce at 07:27 No comments: 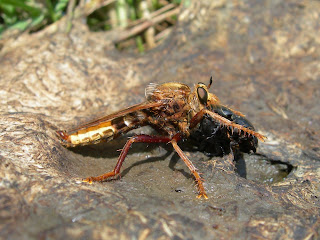 A visit to the Newgale Hornet Robberfly site today produced a count of only 13 - hopefully there are more about - the weather was nice but very blowy.
Remember to keep an eye out for this BIG bold fly lying up on cow/horse pats wherever there is some decent habitat and extensive grazing by cattle or horses/ponies.
Posted by Jon Hudson at 14:53 1 comment:

One day of sunshine - Clouded Yellow

One day of sunshine and suddenly there are dozens of common blues and wall browns around at Newgale, Small tortoiseshells in my garden in Camrose and a Clouded Yellow flying down the road through Keeston.
Posted by Jon Hudson at 14:50 No comments: 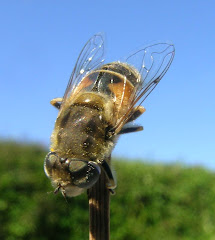